I just found out via the eReader newsletter (which I still receive although I don’t exactly know why, since I definitely don’t have time to read fiction anymore) that Kurt Vonnegut passed away last April. Rather sad news. What can I say other than rest in peace and thanks for all those smile filled evenings that I’ve had reading Cat’s Cradle and Breakfast of Champions. So it goes…

Even if my PayPal account is in minor pain, I’m looking forward for a summer filled with great music. Mmm, already thinking about those afternoon trips to Bodi Lake. Last year’s experience confirms that a chilly swimming session after a steamy workday completely restores one’s faith in life.

Also, thinking about switching my trusty Kenwood car CD player that performed so well in the Dacia and lately in the C3 with one that can handle USB sticks. Maybe even Ioana’s iPod. If I’m tired of one thing, that’s writing CDs with mixes that I’ll listen to at most a few times (except those real gems) and then forget all about them letting the CDs they’re written on take up precious space in the car. I’m thinking about another Kenwood because it’s a brand I trust - besides the CD player I had a pair of headphones whose plastic broke several times (SuperGlue to the rescue!), lost their fake leather cushion protections but the speakers still perform flawlessly. Anyway, I’m already well equipped with a catalog. I just need the cash. 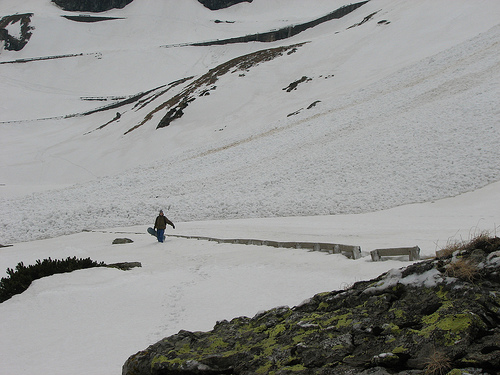 Romanian knowledge is a must. Full of incorrect info and made up quotes, but, well, we’re in the newspaper. Joy! Here’s a screenshot of the article for eternity.

Update: The three photos Ioana took right after the event: one - I’m recovering her snowboard (it’s the photo that illustrates this entry), two - the lower part of the avalanche and three - where it all came from. All three photos worth to be checked out in their original size. You’ll need a Flickr account for that.

The User’s Manual and the Quick Start Guide, both in English.

Because I found the two PDFs after lots of digging I thought I’ll make the whole process much easier for other Googlers. Waiting for the cease and desist e-mails from Nikon’s lawyers…

If you found this post useful don’t forget to check out the items below!

Actually I’m back since yesterday night but I was waaay too tired to post an update. And now I’m at work, basically burried in stuff to do. If you’re really interested you should keep an eye on my Flickr photostream as that’s the most likely place to first receive updates.