Hehe, what a couple of e-mails can do. Oh, fair warning: get your propeller hats on, because this is yet another post about RC.

While listening to the last episode of the InsideHeli podcast, in which they were talking about RC helicopter related terms and definitions I’ve been expecting RC Helicopter Wiki to pop up any moment. After all that’s why I created the site, to have every definition and explanation at a click distance. But they didn’t mention it so I wrote Chris (one of the hosts of the show) about this, he responded with an unneeded apology and what do you know, here’s a snippet of the current episode…

It’s funny how he pronounced my name (it’s Yanosh btw) but I’ll forgive him, since this was a HUGE plug at least from my point of view. There is no visible traffic spike yet, but the show has only been released yesterday night and the US is just waking up around this time…

Anyway, I feel like an Internet superstar yet again.

You can download the full show if you’re that interested. The most interesting part comes up around 18:37. :-) 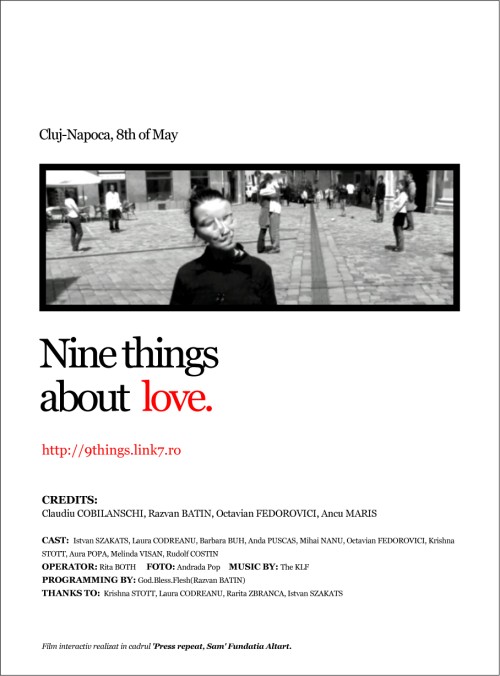 Whoops I did it again!

Yesterday evening, after taking care of some errands I went to the field where we usually fly. A phonecall later I discovered that I’ll be alone but that was OK, it meant I will be able to concentrate on my flying. There were some gusts of wind when I arrived there but when I started flying it got calm. Perfect conditions!

With the dawn behind me I raised the heli in the air and did some right to left passes in front of me. All was good and I was actually admiring the turns I did to my right because I was doing them nicely banked while strongly fearing the turns to my left and usually bailing out of them turning the heli tail in and flying to safety. I flew one battery without ever landing and I was extremely proud of myself. I set it down, installed the second battery and off it went again. Did some right to left passes again and then I said to myself “hey, I must try to do that turn on the left”. And I tried it. I rotated the heli’s nose towards me but I did it with the heli having next to no airspeed so it lost a lot of altitude. Unfortunately I haven’t raised it back in time and the next thing I know the heli was on the ground and I shouted out loud “not again!” (in Romanian of course).

Fortunately I actually crashed it from only about 20 cm or so and pulled the throttle stick all the way down so the damage was minimal: the blades flew a few meters again, the flybar was an S and the main shaft bent. One stabilizer rod popped off the tail but the tail boom remained straight and I managed not to strip the main gear. This was all I could visually find. I was sort of happy because I had all the necessary parts at home and was thinking about being back in the air by the weekend.

I went home, cut off the bent parts of the flybar with my Dremel, pulled the rest out of the head block and then connected my stand-alone receiver battery to do some tests without the risk of the main motor spinning up and doing damage. And that’s when the bad news came. Something was clicking / clanking. It was the right cyclic servo (usually called the pitch servo). I was assuming it stripped and after I tried applying some force on it my suspicion was confirmed.

So now I’m in the market for a servo. Luckily a friend is ordering himself a T-Rex 450 Pro just today and I’m quickly jumping in and getting not one but three Hitec HS5065MG servos. These are the digital successors of the wildly popular Hitec HS65MG’s so they can only be good. Also the plan for the near future is to get metal gears for all three of my JR DS285’s. This way I’ll have two sets of metal geared digital servos - one set doing their job on the heli and one set waiting in the drawer for their turn.

Well, that’s the crash report… Hopefully back in the air by next weekend.

Update: I found a local guy with three spare Hitec HS65MG’s. I’ll be picking them up this afternoon. Might be back in the air by the weekend? :)

The Helilog - A follow-up to part 1

Because I can’t really call it part 2.

Yesterday I went to the field as planned although during the day we’ve had sort of a storm… However, it was calm when it was time to go home so I stopped at the flying field. And this time I announced everyone I know from the Baia Mare RC gang right from the morning so I wouldn’t be alone.

As I went to the middle of the field the wind picked up again, but I did a very short hover just to warm up. I’m getting used to hovering in slight wind, hehe. Then landed and waited for Sebi who arrived in a short while. After handing over the helicopter for a short inspection / discovery - it was the first time he saw it - I said that I’ll have a short flight to make it worthy for him because he hauled the DSLR with him. Although he protested as he didn’t want to be the cause of a crash I hovered for a short while and you can see the results below. :-) All photos by Sebastian Pintea who’s videos you can see here (photos here and here).

Since I have a few new contacts (mostly on Twitter) interested in the subject I thought that now and then I’ll post a few words about my flights. It’ll also be interesting for me too to re-read later on, to see how I progressed. It was the same with the snowboarding experience…

Yesterday after work I went directly to the so called flying field - which is only about a kilometer away from where I waste my precious life 8 to 5 (lunchbreak included) - but found nobody from the gang. The problem was that the moment I placed my heli’s case on the grass the wind started blowing or I started feeling it blowing… I was quite frustrated because I checked my weather widget of choice all day, and it was showing winds alternating between 3 and 10 km/h but I’m guessing that there were 15 km/h or more there as it’s an open field. So I made a longer preflight check, called a few people and then when I felt the wind calming down a bit I set up and lifted the heli into the air. It was awkward at first because my collective management seems to have vanished during the winter. But after calming down and with a bit of self control I managed to keep it in the air without any major effort. Unfortunately the wind gusts started again and I was feeling them but it was all for the good because I realized an important thing.

The wind was coming from behind me and implicitly the heli and I noticed that when I tilt the machine forward it was rising in the air quite fast. After giving in to the wind, settling down and doing a little bit of thinking I suddenly realized why. The main rotor acts as a wing and when I tilt it and the wind blows underneath it, it works exactly like the wing of an airplane. Also this is the reason why back in the autumn when I was doing the dumb type of forward flights my heli rised strongly at the end of the forward lines. I was going forward with a certain speed and then tilted the helicopter back to slow down but this also meant that I was getting “wind” underneath the rotor so naturally the heli rose. Awesome eureka moment.

The next hour or so went by with me alternating between laying on my back, chilling and watching the sky, getting the helicopter in the air when the wind gusts calmed down, then chilling some more when the wind resumed annoying me. I also checked out something else: I placed the heli on its case and went away in different directions to see how good I’m seeing it in different orientations. And I was seeing it quite well although the backround was the greyish green of the field so I’m guessing that I can see it even better while it’s up in the air. After a while the wind calmed down for good but I was through with my new Flight Power packs which I purchased during the winter / early spring. Never fear, I still had two Kong Power packs which I got together with the heli (actually, a few months before actually getting the heli). So I installed one of these older batteries. And what a difference! Even if they have a higher C rating they somehow felt drained of power and I even felt as if my ESC was pulsating so I quickly settled my heli and checked the pack but it was only lukewarm. Weird. I replaced the pack and set off again. This wasn’t as bad but I noticed something else. While with the Flight Power packs I could raise my hands off the sticks and the heli remained in pretty much stable hover with these packs it was strongly nose and right heavy. So I tried trimming it as best as I could but this way I was having problems lifting off and landing.

Unfortunately the precious minutes of battery power ended quickly and I packed up and went home, full of conclusions and some self confidence restored. Actually the plan for the day was to try flying side-in as per Radd’s School of Rotary Flight, but that goal somehow vanished while I was playing rodeo with the wind and realized how heavy my Kong Powers were. That’s the exact reason why I brought my heli and the charger to work today. Can’t wait till 5… :-)