Hey! What is this? What’s happening!? Am I really downloading with one megabit per second? And it’s not 6 PM! It’s not even the weekend! The service is working as advertised! I am actually getting what I’m paying for! Wow!!! I’m sure this must be some kind of glitch. They will fix it soon and it’ll be back to good ol’ 256 kbps for the day.

Scenario: You are a conscious user and you back up your site’s database every once in a while. And you sit smiling and content knowing that your precious data is safe. Just to discover after disaster strikes that you can’t restore the contents of the SQL dump file because of upload size limitations or because phpMyAdmin would run out of memory while decompressing the gzip / zip file.

In these cases there are two solutions at hand: if you have console access you can login and import the plain SQL file (which you previously uploaded via FTP) by typing a command like “mysql -uusername -ppassword < dumpfile.sql” or if you only have access to phpMyAdmin you can open up a text editor and split the SQL file into smaller parts that can be uploaded sequentially. The problem si that if you have a larger dump file this can be a reeeaaaly time consuming job.

Today I encountered a problem like this. And since I had no console access and I was in no mood to lose a few precious hours splitting up a 40 meg file by hand I googled for “sql splitter” and I found a program called SQLDumpSplitter 2. Unfortunately the author’s site was not working (and since I don’t know any German I couldn’t really figure out why) but I found an alternative download on a dutch web developer forum. And since that forum required to be a member to be able to download I thought I should offer yet another alternative download location without all those registration related mini headaches. Here on this site… 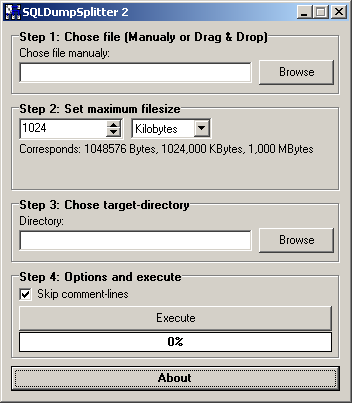 So here it is ladies and gentlemen: download SQLDumpSplitter 2 (or zip compressed). All credits for writing this program go to Philip Lehmann-Böhm (http://www.philiplb.de).

Since this is by far the most popular post on this blog, I believe it deserves an update.

If you’re having problems with SQLDumpSplitter 2 please have a look at the following resources (picked from your super helpful comments):

So I’ve been hosting this file for almost 12 years now and this morning I received a comment: 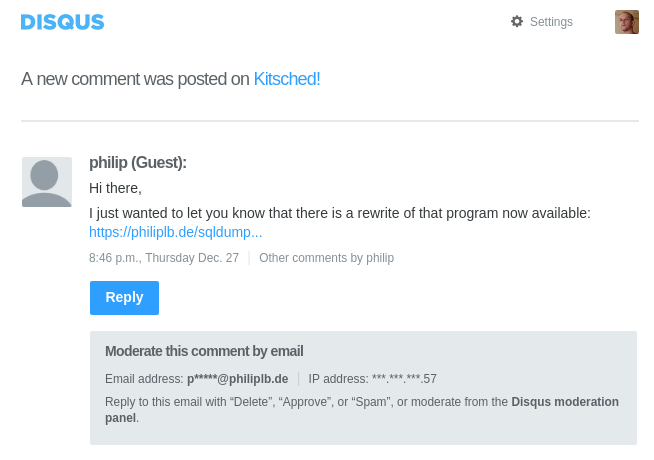 There’s an update for SQLDumpSplitter! Which is now multiplatform!

Also while checking Philip’s site I noticed that he mentions that I’m still hosting the program which he wrote in 2002(!). I consider this a nice nod as this blog of mine might not be the most active for some years now but it sure is persistent. :-)

My computer’s performance lately strongly reminds me of the first generation Pentium days when viewing more than one web page at once was something that closely resembled a kamikaze mission. Actually if I give it a second thought it wasn’t really the processor’s fault (I’d rather blame the limited memory) and truth to be told my Windows installation dates back to sometime last year and I sure installed a lot of crap in the meantime but still, I must say it: I just can’t wait for that Dual Core upgrade!

Reading the first blog entries I wrote back in 2001 (wow, it really seems that was centuries ago) I realized that my English level was basically the same back then as it is now. And that brought up the question: what now? Should I take some advanced English courses or should I improve my miserable French? I guess I’ll go with option B.

I mean this (click on the image for the bigger version): 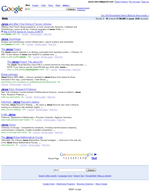 It makes me feel all warm and fuzzy inside to know that in Google’s opinion I’m the 6th János on the planet. As in János the Hungarian equivalent of John. You can perform the search yourself but results may vary.