Wednesday, I finally succeded concluding a deal with a guy from Galati so he sent a package which I received Thursday. It contained a second hand iPod. The mother of all gadgets. The über MP3 player. The coolest thing since sliced bread… The guy who brought it couldn’t manage to separate the paper containing the receipt from the package so he had to rip it open. This gave me the oportunity to have a look at it while on my way home. Neat device, a little thicker than i thought it would be. 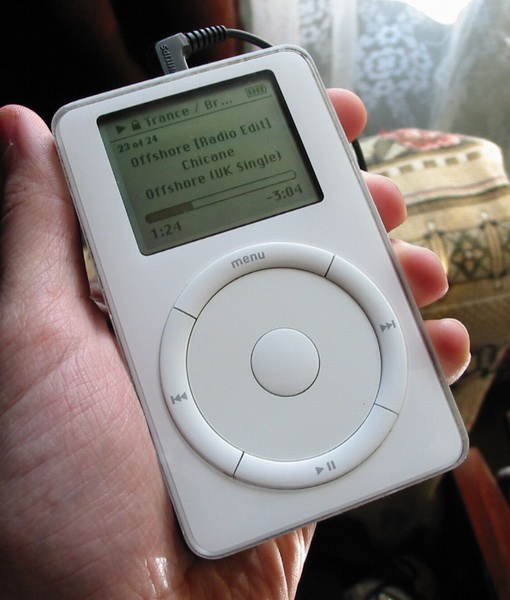 I got home, plugged the earphones in and pressed the menu button. Uuuh, nice lighting. About 5 seconds passed and it warned me about the battery status. I ignored the message and started a tune from which I heard about two seconds and the battery died. Hmmm. Sat down. Had a better look at it. The back was scratched. But the display looked surprisingly good. I had to get some power into it. Picked up the phone and called a friend to ask about a FireWire card. He knew someone so I got online and chatted with the guy on Yahoo Messenger. He said he would bring me the Pinnacle card that night. It was around 2 PM… To pass the time I played and finished Call of Duty (what an excellent game!) and the night slowly came. I met the guy at the bus station, went around his place for the drivers. Rushed home and after waiting a while for the card to heat up to room temperature (there were -10°C outside) I plugged it into my ‘puter and started up. To no avail. My mainboard started making some ambulance like sounds. It booted up after a while but it wouldn’t want to load Windows. Dang! I fiddled with it about 3 hours and did everything that came into my mind including cleaning the contacts on the PCI card with alcohol and removing each and every other card (except the video card of course) and leaving it alone in my computer… Still nothing. I went to sleep upset. In the morning I thought: OK, one more try. And it worked!

So I plugged the iPod in. And since then the fun started. I can only say one thing: it is the one thing I bought that satisfies me the most.