The weekend was absolutely amazing 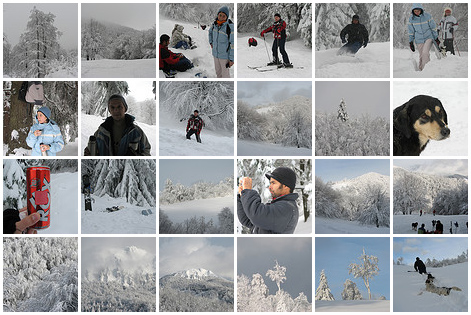 Oh boy, what a weekend it was! I can only wish to have half the fun I’ve had during this weekend in the weekends that will follow and I promise that I’ll be completely satisfied.

Saturday we hit “The Doctor’s Garden” which is a (mini) slope right of the hiking path that takes you from the Pintea Viteazul Inn to the Rooster’s Crest. And even if Sunday we went to Cavnic where we had a skilift and a proper slope to our disposal I can say without a trace of doubt that we had way more fun riding down the Doctor’s Garden. And climbing back up from the base to the top… Thank God for energy drinks or else our eco snowboarding trip would have been a complete failure! When we arrived there it was kind of cloudy and a few minutes later it started snowing hard. However after about half an hour the snow stopped and the clouds went away revealing one of the most beautiful blue skies I ever saw. And the surroundings, those trees covered in snow… Words can’t really do them justice.

Later the clouds cleared up yet more, revealing the rocky walls of Secatura. Oh boy. But all this wasn’t enough and I decided to conquer a nearby hill. Steve joined me (later regretting the decision) and once we reached the top we experienced yet another of those breath taking moments. Because the view was… Uhm. Just check that Flickr set already!

Sunday we went up to the Roata slope at Cavnic because we heard that they’ve started up the skilift. It was nice, but nothing out of the ordinary. You know, same old Cavnic, same old Roata. Well, except maybe that we were boarding on the 11th of November like it was January / February.

Once back in Baia Mare we (as in Ioana and the undersigned) attended the glorious ceremony of my graduation from a n00b driver to a fully-fledged-no-more-stupid-yellow-circle-with-an-exclamation-sign-in-the-middle “pro”. Hehehe. Aka, 1 year passed since I acquired my driving license. Without as much of a scratch on the car(s) - except a few close calls. Touch wood and hurray me! Don’t miss Sunday’s photos on Flickr.

The weekend is looking good!

Some recent photos from Cavnic. Let’s hope it’ll last through the weekend. It’ll be the first time our C3 will transport the boards and since we didn’t yet had the money to get a proper snowboard rack over the car we’ll just stuff them inside. Good bye rear seats - hello 2 person car. Anyway, it’s looking good and we’ll sure have a healthy dose of fun.

MacAdSensePlus - An AdSense monitoring widget for your Mac's Dashboard 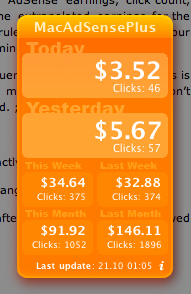 I just released the second public version of this widget which includes a bug fix related to incorrect reporting for weeks spanning 2 months and a debug mode which is turned on by default… But let’s start at the beginning, shall we?

First the description: MacAdSensePlus is a Dashboard widget that conveniently displays your Google AdSense earnings and click count for today, yesterday, the current and last week as well as for the current and the last month.

This is my first effort at writing a Dashboard widget and since I didn’t want to start from scratch I set out to modify MacAdSense which was already out there, was written in PHP (yey!) but was showing too little info for my tastes. So I sat down on one gloomy weekend after Ioana’s grandfather passed away and started tweaking it as needed. As of version 0.2 I still can’t consider it fully ready as the it’s icon for example still belongs to the original MacAdSense but I’m pushing forward as fast as I can and I’m not a graphic artist either.

The main thing I’m missing now are testers. Testers who can provide me with feedback. And the debug file. So I can see what’s wrong and why does it display only zeros for some people. I won’t start implementing new features (like the suggested currency conversion) until I’m not convinced that it grabs the basic data for everyone. Here are some stats for now: works for 3 AdSense accounts of which 2 were tested by me. Reportedly doesn’t work for 2 but there might be others that downloaded it after my “post about it on every Mac forum” campaign and never bothered reporting back if it works or not. Grrr.

Anyway, download version 0.2 and test it out. Requirements are Mac OS X 10.4 or later and an AdSense account that’s making some money. And most importantly, remember kids, if you download it, whether it works or not feedback is essential. Use the comments Luke!

Woohoo, early snow usually means early snowboarding action. And judging by the forecast displayed by the screenshot above it certainly seems like we’ll get some action this coming weekend. What can I say? I’m counting the remaining seconds! :) 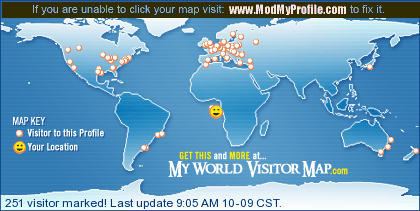 Oh come on, update those databases already! I’ve been seeing this for months since my provider changed my IP. Since then, according to this widget I keep bumping into on tons of MySpace profiles and some blogs, I’ve moved to São Tomé and Príncipe (or at least that’s what I think it shows me). Well, it’s probably nice and warm down there but the truth is, I’m still in good ol’ Baia Mare, Romania.