Yes. Well, not much to add except the mandatory Season’s Greetings.

I just received some bad news from home: Bodri, the one who’s been driving traffic to this site from the Google image search results for “funny dog” long before lolcats and loldogs became the craze, passed away. Although he was kept on a leash as a guard dog he was an extremely active and fun creature, always ready to show some love, even if I have moved from home long ago. And it’s very strange because just Sunday night when I helped my father move some things around the house, he was running circles annoying us… Well, may he chase the chickens (his favorite activity) in a happier place.

I mean, they’re finally updated to the current status of my Flickr photostream. They’ve been stuck with some photos shot during our visit to Sibiu for more than half a year now so it was about time that I unstuck them. The truth is that I lost the thumbnail importer tool the moment I changed servers and abandoned NightmareHost for my own private server on The Planet and only now I found them, while doing some spr… uuuh, winter cleaning on my hard drive at work.

In other news, drumandbass.ro is almost reborn! :)

I rarely promote other projects of mine around here, a notable exception being the left sidebar, but this time I’ll make an exception as it’s something which I very much like.

But first, some introduction. You might or might not know, depending on whether you’re following my Flickr photos or not, that I’ve got myself a radio controlled helicopter around the end of June. Actually, now that I think of it, I remember that I’ve recently posted two good times videos right to this blog. Anyway, this was the culmination of my RC helicopter project which I dreamed of since the start of last year and which actually debuted in March with the acquision of a transmitter and 2 battery packs together with the matching charger and later various accessories. Later here means in between the acquisition of the transmitter and the helicopter kit itself.

So I received it, put it together as fast as I could and went through the emotions of the first successful hover. Fortunately I had almost 3 months to practice in the sim so these first steps weren’t such a big deal. After a lot of hovering in the backyard I kind of put it aside for a while because I needed more space, a lot more actually, to be able to hover freely without a looming cherry tree above. I finally found a suitable spot by the end of the summer. It was a concrete sport field in the remote resort of Izvoare. After this discovery I probably drove Ioana crazy with my constant nagging about wanting to go flying as often as daily. All I can say is that I truly had a blast at Izvoare (the two videos I posted were shot there) because I could finally test forward flight, piros and other maneuvers I couldn’t do in the backyard because of the space limit. You might ask why I didn’t go to the park or some other public place in the meantime. Well, an RC heli is a strange beast as it doesn’t really like to stay in the air and without the pilot constantly focusing all of its attention it crashes in no time. And as I’m the emotional type I didn’t really want any bystanders asking questions around me when I’m flying. And even less did I want to crash my heli into someone…

Oh, I trailed off. Badly. What I wanted to say is that the learning curve when jumping into RC head first by choosing a helicopter is very steep. And even if the various RC forums on the Net are chock full of helpful people waiting to help with your questions or just give you a friendly piece of advice I thought it would be a great idea to have all the information in one place. So I created the RC Helicopter Wiki. It started up slowly at the end of June featuring Adnan’s graphics and with your’s truly importing a ton of entries from the glossary section of Jeff’s HeliGeek blog (with his permission of course) but took off nicely since then. Mostly after Neil (aka unwind-protect) joined and wrote a huge number of new and extremely valuable entries. At first I’ve tried promoting it on the various forums with mixed but mostly positive feedback but I noticed that lately the ball sort of really started rolling by itself as new people are noticing the wiki and are posting about it on various forums unknown to me which results in more incoming visitors. The great G does it’s job as usual and the site is getting a fair amount of visitors from searches too.

Hmmm, if you’ve read this far I might as well ask you a favor too… :) If you have a free slot on your blog or website and you wish to help a non-profit, l’art pour l’art style project, take this code and link to the wiki. The Align T-Rex 450SE V2 (see? I’m doing it too) is on of the most popular RC helicopters on the market today and I’m expecting a large number of visitors to pop in from Google if my link climbs up to one of the first result pages.

As a conclusion I could say that RC is a great hobby and although it’s a bit on the expensive side, for me it’s a lot more revarding than, say, photography. I’ve always been the technical guy, I’ve always been taking apart toys as a kid curious about what’s inside and now I’m sort of living my childhood dream. Many said that I’m childish and that I’m wasting my money but I’m having the time of my life and it sure is a lot more healthy to spend a Sunday on the field relaxing with the glider guys than, say, in a smoky bar… 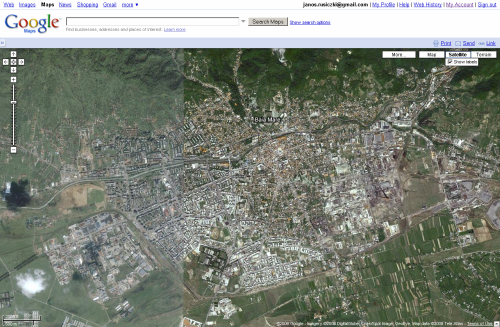 High(ish) resolution photos of all Maramures county (at least as much as I’ve checked) were added. It’s funny that the western third of Baia Mare is represented as part of a nice high resolution tile which was there for a while now, and the other half is now highish resolution too. Can’t really see the house I live in, but at least the streets are visible. The other fun part is that the true high resolution part (the third) looks like a really old photo, because for example the Kaufland supermarket is nowhere to be found on it. However, the other one is new as I could identify the Ambient home improvement store among others.

Another sweet find were the slopes of Cavnic. Here’s a screenshot for eternity. And this is also a very recent shot, because the Roata Hotel is clearly visible.

But if you’re looking for Baia Sprie (Felsöbánya), hehe) my tiled version is still the best you can find on the web.