More news from the RDS planet

It looks like upload is now 512 kbps. That’s double the old limit of 256 kbps. A much welcomed change as I don’t have to wait AGES to send something to somebody or to upload a site or whatnot. Wow, I can’t believe it but I couldn’t really complain about anything concerning RDS’s service lately. Actually I’m stating here and now that I’m more than satisfied. Touch wood.

Oh, and don’t bother asking if you don’t have at least a 1 megabit broadband connection.

Update: And we have a winner.

LATEST UPDATE: I have no invites for the moment but as soon as I’ll get some I’ll start sending them out in order.

UPDATE (April 3rd): Got 5 more invites. Sent them out quickly… The last to get one was Josh.

Shake your ass to this: 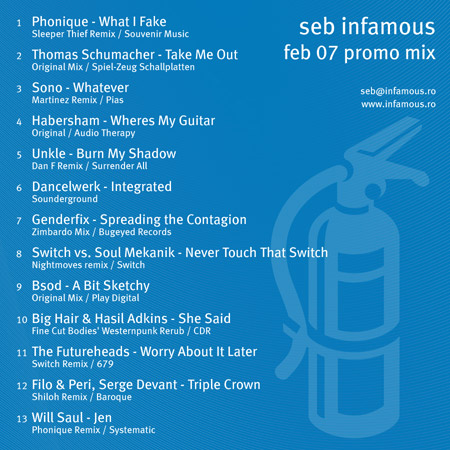 Bragging corner: I was the one who recommended Dancelwerk to Seb, hehe.

Snow(board) report for the first weekend of February 2007

Yeah - yeah, I know it’s already Thursday but better later than never, right? Plus, it looks like I won’t be reporting about anything this weekend because sadly it’s been raining almost constantly since yesterday. And it melted away most of the snow here in the city. I don’t know what happened up in the mountains but my bets aren’t exactly positive.

But back to the better times. And by this I mean last weekend. We (Ioana and me) were up at Cavnic again both Saturday and Sunday contrary to the plans we made to visit the slopes at Suior. Saturday we got there mostly because we joined a friend in his car to save some precious gas and we liked it so much that we decided to do an encore on Sunday.

If you read my previous report you might be wondering how come we had such a great time as opposed to the weekend before (the grand season opener) when we were so massively disappointed. Well, that’s because this time we went to the other slope. Roata, to be more precise. And what a difference ladies and gentlemen! Actually it’s funny how when I have to bash something I’m so full of words but when it comes to praising I suddenly run out of inspiration… But trust me, it was awesome. The one thing that made the major difference was that this slope is being kept in great shape. And that means no bumps and no ice or rocks. Saturday when we left we actually saw the snowcat doing it’s job on the main slope but it was also active during the day taking care of the alternative slopes. Which brings me to the next point: expansion. Compared to Icoana where they closed one of the tracks this year these guys worked their asses off this year expanding the mini-resort they have. Uhm… This is harder to explain and I think I’ll let the map (shamelessly stolen from skimaramures.ro) do the talking.

So open up the map and follow me. Last year the one time we were up there we only tried the upper blue slope once and then we closed the season with quite a few glorious runs on the lower red one. I don’t know if they had the upper red and lower blue one back then… Anyway, we tried the lower blue track this year and it’s one great chilled track. Plus it’s almost empty so you can do whatever you want. We planned to ride the slopes marked with black on the right side of the map but we’ve given up after hearing reports that it’s icy and rocks are sticking out. Thanks, but we’ve had our share of rocks and board scratches the weekend before at Icoana.

The prices are fair, the lift tickets are a bit more expansive than at Icoana but this is well justified by the longer length of the slope (I’m talking about the lower red one - because that’s where we spent the bulk of our time) and the quality of the track which is incomparable. Oh, and the mini-tracks on which the ski lift pulls you up tend to form huge bumps at some locations but a guy with a shovel was taking care of this problem. Just as I was suggesting last week. Now that’s nice.

The only negatives I can think of are two. One: they have toilets just so you can’t say they don’t. Unhygienic, wooden boxes hidden in the woods which if you intend to visit I suggest you’d better be armed with a strong stomach. And two: it’s a race down at the start of the ski lift. They hand out those poles to the people so fast you might think it’s some kind of a contest. And this causes accidents… But that’s about it.

Truth to be told we did visit Icoana for a few rounds both on Saturday (after sunset) and Sunday (to check on some friends) but there’s nothing new to report as it was exactly the same as the week before. That is: crap.

This entry got really long again. So it ends here. To be continued next week… Hopefully!

Whoops! I almost forgot… There are of course a few photos on Flickr. Check them out: February the 3rd and February the 4th.

I silently sneaked them in a while ago but they turned out to be more of an annoyance than a feature. So they’re out. I just hope I deleted the relevant JavaScript snippet from all my templates. If you’re annoyed by them on other sites here’s a link to the gizmo’s FAQ which explains how to turn them off. Or if you don’t trust cookies and you’re using Firefox with the Adblock add-on installed you can easily ban the whole script.