XBMC - My media center of choice

A program I started using heavily lately mostly to forget the misery I’m in. Why would I need a media center you might ask. And I’ll respond.

Sometime around the end of the summer I “borrowed” a secular TV from my parents, actually our first color television they bought in the first half of the nineties, because lately it was just sitting there in my ex-room perfectly functional and because I bought a Dreambox 500S clone to be able to watch digital satellite. Actually a blast from the past, as you might remember that I’ve had digital satellite when I was living in my parent’s house in some better times. Sigh. After the initial enthusiasm about watching satellite TV passed… Wait, don’t get me wrong, I’m still watching TV, but not as intensively as in the begining. So after the initial enthusiasm passed, I dug out my trusty old PlayStation 2 to play some games on the rainy weekend days and also remembered I had SMS installed on it. SMS stands for Simple Media System and it’s actually a DivX player for the PlayStation 2. It works something like this: you launch a program on your PC, tell it which folders contain your media, then you boot up your modified PS2 fitted with a network adapter (long live eBay!), start SMS and in no time you’re watching said media on your TV. It’s much more convenient because the TV is bigger than my monitor, a lot closer to the bed and I have the PlayStation controller as a remote.

This was the first step. After realizing how convenient the concept of a media center is and hitting the limits of my poor PS2 - it can play DivX, XviD, MPEGs and MP3-s but it doesn’t have the processing power to be able to handle the newer formats like mkv - I started digging for solutions. Actually I remembered about XBMC because I sort of bumped into it several times during my reads of Download Squad and Lifehacker. So I installed it and started the testing / accomodation process. 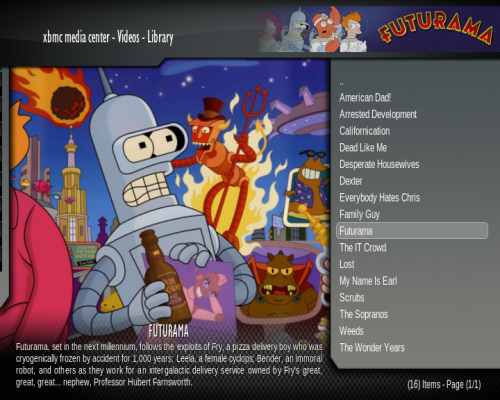 [ Sorry for the slightly skewed aspect ratio of the screenshot, it’s the PAL resolution. ]

One of the first cool things I noticed after the elegant menu operation was that after showing it the folders that contain my media scattered around several harddrives (some even networked) I could browse as with any file manager or I could switch to library mode and let it scan everything and pull information from the web about each movie and TV show episode I had. That’s hands down AWESOME becuase when I say information I don’t mean text only. It also fetches DVD covers, episode screenshots and so called fan art which are basically splash screens for movies and TV shows. Needless to say it organizes TV shows by seasons and episodes and remembers which ones you watched and which you didn’t - so by using µTorrent and eztv and with a bit of knowledge you can automate the whole downloading process and have your favorite shows waiting for you when you return from work in the evening.

Another very cool thing is that XBMC can play back everything you throw at it (didn’t have any issues until now) even if it’s packed inside RAR archives, so you don’t even need to bother to unpack stuff you get from the Net, thus saving precious harddrive space…

Until this point all was good, except that for every interaction with it I had to get up from the bed and make the 3 lazy steps to the computer and back. This is where the the $11 remote I bought from eBay saved the day. This way, the setup is damn near PERFECT.

– placeholder for a photo with the remote –

After watching several episodes of Dexter and some movies for a few days, yesterday night I discovered another cool thing. It’s called Navi-X, it’s a script for XBMC and it makes it possible to watch everything that’s to be watched on the web from the comfort of your couch / sofa / bed. For the moment I was so happy with the fact that I’m now able to watch Diggnation on my TV that I’ve sort of ignored everything else but I saw stuff like YouTube, Shoutcast, podcasts, Flickr, Adult Swim, Nasa TV, Apple movie trailers… As I said, you can watch everything that’s to be watched. It could be better integrated but until a better solution arrives - or gets included in XBMC - this will do.

I might be repeating myself here but I’ll have to state it: XBMC is A.W.E.S.O.M.E.