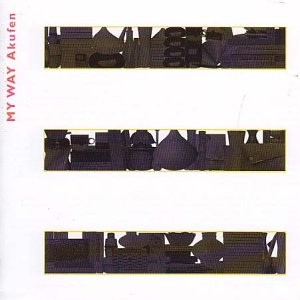 They call it microhouse. I didn’t know they did. I just thought it’s forward looking house music that happens to sound extremely groovy.

I first found out about Akufen last year when I read about him in somekind of a top ten and then downloaded ‘Deck The House’ the same night. It played for a while in my MP3 player back then and I liked the song a lot but somehow I forgot about it later. But about a month ago I put my hands on the whole album and it’s a great piece of music that got stuck in my earphones for a few weeks now.

If anybody would ask me now how today’s, or better yet, tommorow’s house should sound, I’d say: Akufen like. Checking some reviews on the Internet today, I saw that for some the style was already old and expired back in 2002, but for stupid me it still sounds extremely fresh and groundbreaking.

By the way, Akufen is Marc Leclair from Montreal, Canada and his music can be best described as… Hell, I’m just going to quote this review from Stylus Magazine:

Akufen’s gimmick (if you will allow me to be reductive for a moment) is his use of pick-a-mix radio samples to create melodies. Akufen molds sub-second fragments of pop songs, people talking, and other auditory ephemera into burbling melody lines.

And let me tell you that as chaotic as this might sound it turns out great for him! Oh, and if you have a credit card at hand you can create a trial account at Emusic, guilt freely download the whole album and then still have a bunch of trial credits to check out some of the other great indie stuff of which Emusic is chock full of…

It’s time to do some low profile text based browsing for a few days. Well not really text based but no big Internet downloads for János for a while because he’s been a bad boy lately. A bad, bad, bad downloader boy…

Why? Well, let’s do some simple RDS mathematics here. For 29 bucks you get 12 gigs of traffic each month. And yeah, 300 minutes for your calls in the Romtelecom network and 3000 minutes for your calls in the RDSTel network which I’m just wasting every month, since I know a total of 3 RDSTel numbers and they’re not people I call that often. That’s not too bad but if I look at my traffic monitor it says 6.5 GB. And the date says October the 13th. Whoops! A simple calculation will show that when you have 12 gigs of traffic per month you can do about 400 megs per day. 13 * 400 is 5200 megs and that means I’m ahead with more 1 gig and I have to wait about 2 or 3 days for my cable modem to cool down by downloading the 3 CDs of the latest version of Mandrake Linux from the linux.ro FTP because traffic with linux.ro and a few other sites under the RDS umbrella (of which the other notable one is Linkmania gaming site) do not add up.

Fortunately time will pass quick as this weekend I’ll be partying like mad at the TMBase festival. Yay!

Absolutely undoubtedly this will be the party of the year. Thursday come quick!

OK, so after five days of using and loving it and two days after promising I fully integrated del.icio.us into my site.

I sacrificed the links section, which never got filled anyway and added the link blog section which is sort of a side blog. It works like this: I surf the Net and when I see a site that’s worth mentioning (in my humble opinion) I press the bookmarklet on my browser’s toolbar which posts the bookmark to del.icio.us. Then, I made a script which gets my bookmarks for that day each 30 minutes via the del.icio.us API. These are recorded in my local database and then listed on the link blog page, which is in early beta stage for now, but I’ll have to work on it soon as there’ll be too many links and days to list on one page.

All this means that when a visitor checks the page the latest links listed there are pages I visited and bookmarked at most 30 minutes before. That’s almost live, I’d say.

How funny that now as I’m writing this, del.icio.us is temporarily down… :-(

I created an account for myself on the “social bookmarks manager” aka del.icio.us (while on the site be sure to check out the popular section) and I found it to be such a great tool that I’m thinking about integrating it into this very weblog. Shouldn’t be too hard.

Will try to do it right now as a matter of fact.