Yep, tomorrow will be the day when I’ll, as Romanians (and maybe others) say, change the prefix. I’m sure I’ll add a post to mark this glorious occasion, but for now I want to vent in a more negative voiced entry about stuff that I’ve been thinking about lately.

Looking back at the last 10 years, I haven’t accomplished that much. I started as a kid and ended as kid, at least at heart. The greatest breaktrough was getting a partner in life to whom I’m grateful beyond words for being there and helping me through some fairly tough times. Thank you, Ioana.

The other good thing was that I advanced professionally, but this is partly overshadowed by the fact that I have a dead end job right now. Question: Where do I advance from the position of Intranet developer in a construction company? Answer: Nowhere, really. I can’t really hope for a raise either, because they say it’s the recession (although we have way more work than last year) and they taught us to be silent and happy that we still have the job we have. And to be honest this place still pays me very well, much better than any purely web oriented company would pay me in this shithole of a town. I’ve been also thinking about freelancing again, but I read some articles on FreelanceSwitch these days and I remembered all too well the painful facets of being a freelancer. Plus in the summer of 2007 when I struggled to get a job because I was deep in crap, I promised myself I’ll never get into sticky situations like that again. Basically I recognized that freelancing is not for me. My plans for the near future include trying to sell products via the web but that might end in a fiasco too, due to the fact that my commercial skills are next to none.

So what remains to be done is to keep the 8 - 5 (lunchbreak included) and work a little extra in the afternoon in my so called free time. When I’m in the mood that is. Fortunately the after 5 work is usually of the pleasant type with small exceptions. One of these exceptions was a cute little file sharing site which I’ve built for myself after years of working for others. I’ve launched it after working on it for about half a year and it was all good until the person who was my trusty client for 8 years started sabotaging me in ways I could’ve never imagined because this site happened to offer the same functionality as one of his. Suddenly we weren’t friends anymore. It felt great… But to return to more pleasant things I should mention here that there are two persons in my after 5 o’clock life who I love to work with. The first one is Lucian, the one who always gets cool projects on the table and manages the client front like a hero and the other one is Alin, my casual designer, the one that I can always count on when I need a logo, an icon, a rounded corner or even a whole site’s design.

Another dark spot in my life is my family. As I don’t have a family of mine yet when I say family I refer to my parents. I don’t really want to talk about this now but if you read this blog this year you might know that this facet of my life is wreck. And it’s not going to get better. On the contrary.

There are many other things I’m not pleased with and the question that pops up is: what’s worth living for then? Well, beside said partner in life there are the small pleasures. I won’t make a list because I’d surely forget something but there are things that put a smile on my face and for which I should be really grateful. And I usually am.

Re-reading this post I realized that it turned out to be mostly about work, but that’s sort of normal. After all that’s the thing I do most of the time. And will be doing it for many more years…

It's nice being an associate

Mark the date of April the 9th, 2009. It was the day I first helped Amazon sell a book. I would have blogged earlier about this, but I only checked my Amazon Associates account yesterday night…

You might have noticed that since I relaunched this blog the AdSense ads disappeared although, truth to be told, I was making a few precious cents daily while they were up. However, after a sudden hunch I went to Amazon’s Associates Central and created myself a few manually targeted product referrals for two of my most popular posts: the one with the Nikon D60 PDF manual and the one with the MySQL splitter download (referrals at the bottom of the posts, they’re hard to miss actually). And what do you know, someone bought Nikon D60 for Dummies via my referral link!

Although the aforementioned two posts are my most hit-n-run’d pages (visitors pop in from Google, grab what they want and off they go) and so it’s unlikely that the buyer will be reading this post, I’ll still take a shot in the dark and send out a huge THANK YOU to whoever you are! :-) 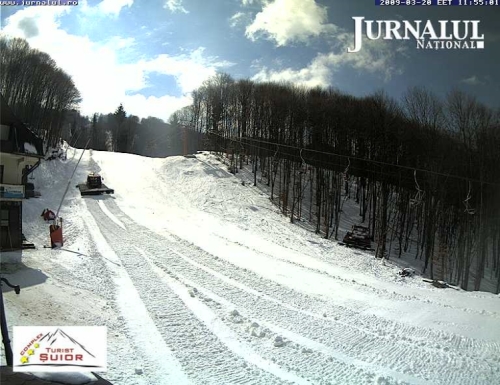 Yeah, I know winter just left and it’s too early to get nostalgic about it but I had this photo laying around on my desktop and thought it would be cool to archive it somewhere. The original file name was “suior-de-vis” which means, for all of the 2 English readers of this blog, “dreamy-suior”. Suior being the name of the slope.

And yes, you are right, I’m stalking Jurnalul National’s webcams quite a lot. Because they’re awesome, mostly in the winter. 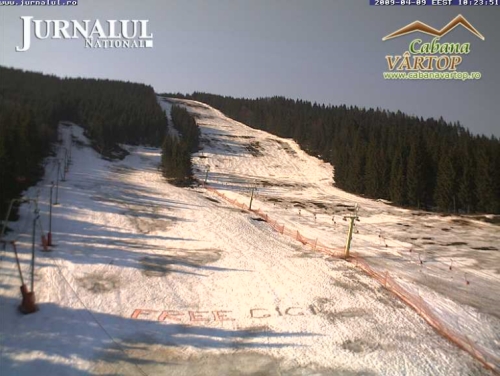 I know this is at least 3 days old (that’s antiquity in Internet time), and I even posted it to Twitter yesterday, but I still find it funny and I wanted to post it before it melts away. Image grabbed from Jurnalul National’s Arieseni webcam (if it isn’t obvious).

You might remember I had a post about scamming people on eBay - it was one of the most popular ones posted to this blog, judging by the keywords people search for and then pop in here from Google. Actually, it was an anti-post, calling the scammers idiots because back then I was very pissed off about not being able to buy things from the small e, but it seems that many did not get that. I was getting e-mails and instant messages from time to time, asking me to teach them scamming and then…

First he called while I was at work. When I saw the number I knew something is not right and I didn’t answer. Then he sent me this message:

An e-mail came next with basically the same content. He then called me again while I was at home. Then called the landline. Called again. And again. Ioana picked up and spoke in Romanian then I picked up the next one and spoke in Romanian. Some pseudo-English mumbling was heard from the other side of the line then click. I set the landline to silent, shut off my mobile for the night and sent him an e-mail telling him to never call me again. He tried calling a few times the next day and then he probably saw the e-mail and sent an apology reply. No calls after that.

I removed the post in a hurry as well as my contact details (which I put back in the meantime).

I don’t want to be racist but do Nigerians consider this as a full time job? You know, like there’s a first time investment in placing an International call to a “genius” who will enlighten them about the great schemes of scamming and then, off they go! How about you know, actual work!? Neah, easy money is much better.