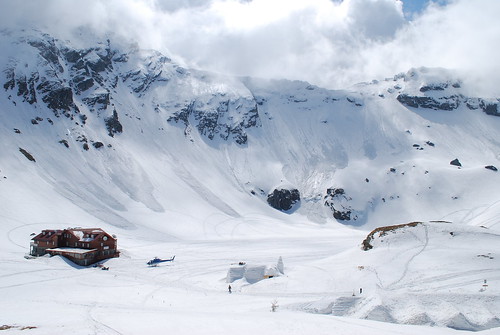 OK, you’ve read about us in the newspaper, but now, a week after the whole thing happened and past my birthday, it’s time to tell the full uncensored story.

Here we go. Hold on, it’s going to be a long read.

We (as in Ioana and me) decided to spend our spring holidays at, or around, Balea Lake because we heard and mostly read so much about the spot being a snowboarder / skier mecca and also being the place with the longest lasting snow in Romania. So we reserved ourself a nice and cozy room at a house down in Cartisoara which is the last village on the northern side of the Transfagarasan road and last Thursday we headead for the heart of the country. Dodging radars and fighting shitty weather we reached the place in the evening and after some adventures we managed to find the house. After unpacking most of our stuff and despite being dead tired we thought we’d check out Balea Cascada (the Balea Waterfall) which is the terminal spot on the northern side of the road while it’s closed (which basically means almost all the year except the late summer and early autumn months).

So after some 10 kilometers of snaky mountain roads we got up to the opening that hosts the “Balea Cascada” hotel and the lower station of the cable car which takes you up to the lake while the road is closed. We saw the waterfall at some distance ahead and again we decided to check it out right then. The funny thing was that the snow started from the immediate vicinity of the hotel. But when I say started I mean started good. After some hard walking in the deep snow, getting our shoes full of it and seeing the first signs of avalanches we reached a place where we decided we should stop because at one point the waterfall was going under the snow and I didn’t really wanted to stand on snow knowing that a wild mountain brook was flowing underneath me. So we took photographs and returned to the car regretting that we haven’t taken our boards with us as the path would’ve been quite rideable. We went back to the village convinced to return the next day all equipped and ready for boarding.

Which we did. At around 11 AM on April 11th, 2008 we were at the lower cable station. Where we received some warnings from a Salvamont (Romanian Mountain Rescue) guy who said not to climb the mountains around the lake because it’s very unsafe. This advice was repeated by several people we asked when we arrived to the top, however when we inquired if we could ride down the valley under the cable car’s line everyone said the risks were significantly reduced if we’d stay away from the steep bordering slopes. After a few minutes of waiting the 10 people that were necessary for the cable car to get moving gathered and off we went, up the mountain. The cable car ride wasn’t really epic because after passing the second pole the line takes you through a wide and steep mountain valley (damn, I don’t know the exact term of that natural formation). We saw the avalanche remains that were visible on the left and right side and were amazed by the road which was almost completely covered in snow. The arrival was a surprise for me, because the whole ride was a lot shorter than I remembered / imagined. Note that I passed the Transfagarasan with my parents in our trusty old Dacia many - many years ago. But I have very sketchy memories of that whole trip.

So we got up. After recovering from the height dizziness the first objectives we checked out were of course the Ice Church and the Ice Hotel. In this order. The Ice Church was free to visit and was quite impressive with it’s crucifix plus the depiction of the Last Supper both carved out of ice whereas for the Ice Hotel a girl appeared out of nowhere and informed us that the visiting fee was 6 RON. I was reluctant to pay, being the cheap bastard that I am, but Ioana whipped out the money and in we went. It was well worth it, as it was something you don’t see everyday. A whole hotel with a lobby filled with tables and rooms with beds all carved out of ice. I took a ton of photos and we truly enjoyed our brief stay at this unique facility. Ioana got out first your’s truly being too absorbed by the photos he was taking. When I got out she was talking with the guy who apparently took care of the place. A few seconds (under a minute I think) after I stepped outside we heard a loud thud and twisting our heads we realized what made it: half of the ice arcade that formed the entrance collapsed. Too close for comfort. In the meantime, while we were visiting the hotel, a helicopter landed near the Balea chalet so it was time for some more photos.

Next we wandered around quite aimlessly taking photos and getting scared by the avalanches which were breaking off the top of the mountain. We also admired the bravery of a few which climbed up on one of the slopes. Climbing a smaller hill confirmed our suspicions: the snow was watery and close to impossible to ride. After returning to the Paltinu cabin we were approached by two German guys who inquired if we’re going down by the cable car. Actually they were recruiting us since they needed the minimum amount of 10 persons for the cable car to move. We told them we are thinking about it, but we were quite inclined to go down by board. After they left we ate 2 sandwiches and then decided we’ll hit it. When we reached the cable car’s upper station we saw the two guys already started down the mountain by foot. So we launched ourselves too.

The first part of the descent was quite enjoyable and adventurous. We mostly followed the road but there were moments when we had to unbind our boards and walk for a few meters only to gear up and launch ourselves again. I remember putting myself over a parapet and then having a steep and speedy descent on a slope right underneath the road. Ioana followed close all the time. After this steep descent there was a rather flat part, or if it wasn’t flat, the watery snow made it seem like it was flat because I was barely moving on the board. I remember seeing two earlier avalanche “tongues” almost reaching what was the road in the summer and thinking about photographing myself in front of the first one only to discover that the second one was bigger and thinking about going a few meters more and planning to stop and wait for Ioana to catch up to me and snap the photo. I don’t exactly remember when I took off my board but I know that these thoughts came to a sudden halt when I heard Ioana shouting from behind. And there was another sound too…

As I turned around and looked up the mountain there was the horror. A massive avalanche broke off from the top where the first “tongue” was. And worse, it was heading straight for Ioana. I shouted for her to hurry and then I saw her stumble with the snowboard. I shouted at her to leave the board which she did and then started running in my general direction. I approached some large rocks and had half of a thought about ducking behind them if the avalanche reached there. It didn’t. However it formed into the biggest one I saw around there and when it reached the road and went well past it with a load roaring sound, it became really massive. It stopped just a few short meters short of Ioana’s board. She was panting fast and looking at me. I was looking at her and then said I’ll go to retrieve the board. She insisted she’ll go. I insisted that I’ll go and I won. She somehow had the inspiration to snap 3 photos while I was returning with her board. We waited for a few minutes to recover from the shock and then headed forward down the mountain. We were of course checking the slopes like crazy. Never binded the boards to our feet again… We used them a few times as sleds, but that was the end of our boarding season this year.

Even before reaching the waterfall’s general area we decided we’ll go round on the road not risking the steep descent on the left (very close to the left slope) even if we saw the German guys heading in that general direction earlier. Looking back, going around on the road wasn’t the best idea. It turned out as a bad one. That’s because the road was mostly snowed in so I had to break a path and because it’s carved hard into the mountain and there were towering rocks above our heads almost all the time. Seeing fresh fallen rocks, the remains of rock slides and hearing the sound of falling boulders didn’t really raise my confidence either. Right around the waterfall when we took the Transfagarasan we’ve met another two German guys who were going up the mountain by snowmobile and they’ve warned us that the road is very long. I thought it can’t be worse but it turned out at least as bad as the avalanche scare. At one point I had a panic attack and I thought I’ll call Mountain Rescue to come and pick us up. Somehow I got up and continued… We stopped a few times under several concrete avalanche controls. And after much stride we somehow reached the hotel where we parked our car hours earlier. I don’t think I was ever so relieved in my whole life.

The funny thing is that the GPS was working in my pocket all this time. So it recorded the whole trip… Once I’ll re-install the necessary software to my PC and find the improvised transfer cable I’ll download the track and amaze myself again.

Not much to say as a conclusion other that we’ve decided right there, seconds after the whole thing came down that slope, that we’re “slope monkeys” and we should stay off the wild mountains during the winter. One death scare was enough. Or was it the adventure of a lifetime. I don’t know. What I know is that I don’t want to repeat that experience.

The next day we visited the beautiful and safe Sibiu and on our way home we made a detour to Sighisoara. And that was our spring holiday.

(Last two rows of photos - including the 3 infamous “right after” shots - by Ioana.)