You might remember I had a post about scamming people on eBay - it was one of the most popular ones posted to this blog, judging by the keywords people search for and then pop in here from Google. Actually, it was an anti-post, calling the scammers idiots because back then I was very pissed off about not being able to buy things from the small e, but it seems that many did not get that. I was getting e-mails and instant messages from time to time, asking me to teach them scamming and then…

First he called while I was at work. When I saw the number I knew something is not right and I didn’t answer. Then he sent me this message: 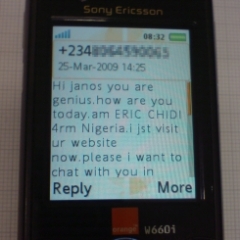 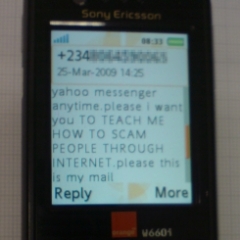 An e-mail came next with basically the same content. He then called me again while I was at home. Then called the landline. Called again. And again. Ioana picked up and spoke in Romanian then I picked up the next one and spoke in Romanian. Some pseudo-English mumbling was heard from the other side of the line then click. I set the landline to silent, shut off my mobile for the night and sent him an e-mail telling him to never call me again. He tried calling a few times the next day and then he probably saw the e-mail and sent an apology reply. No calls after that.

I removed the post in a hurry as well as my contact details (which I put back in the meantime).

I don’t want to be racist but do Nigerians consider this as a full time job? You know, like there’s a first time investment in placing an International call to a “genius” who will enlighten them about the great schemes of scamming and then, off they go! How about you know, actual work!? Neah, easy money is much better.