The new year came. And with it one of the worst things in my life.

Not exactly on the new year’s eve but on the 11th of January we hospitalized my mother. Diagnosis: stroke. She got out of the hospital last Friday (the 23rd of January) and now she’s home again. What makes me very sad is that I don’t know how well she’ll recover. From what I read and have been told I know that there are no full recoveries for stroke victims and I’m not expecting a miracle either but I’m sort of holding on to the hope that she’ll be better than she is now, 2 weeks after that unfortunate day.

Regular readers of this blog might be thinking that I’m sort of a cool kid who (to approximately quote Kit) snowboards and DJs all day and does all those awesome things with those gadgets and RC gizmos. And all this is sort of true, except that I’m no DJ, I only own a site dedicated to electronic music, but what’s also true is that my family life closely resembles a train wreck. At the root of everything there’s an alcoholic father and it’s all downhill from there. At least one of my earliest blog entries had a reference to this fact but after that I sort of shut up, being too embarassed to expose my family’s dirty underwear on the Internet.

As I said it was all downhill in the last years for the two of them. I moved away in 2004 to find some sort of peace and back then working conditions for my freelancing act which were heavily endagered the moment my dad came home into retirement. After moving to Baia Mare I sort of ignored all the signs that not everything is good up in Baia Sprie. Things were actually quite bad. In the summer of 2006 my mother had a heart attack caused directly by him and one of his alcohol fueled escapades. But she recovered well and only found out later that she had the attack. Anyway, she went to Cluj-Napoca to treat herself and everything was good because her brain was functioning normally and she knew what to do. Unfortunately it is not the case now and I suddenly woke up as the expected caretaker - whom everyone expects to do miracles and save the situation. And all this is a bit too much for me.

The situation is in a truly fragile balance at home as my father is taking care of her. But who knows how long he’ll endure to stay sober and I don’t want to think of what comes after that.

Here’s a photo of some better times - just three months ago: 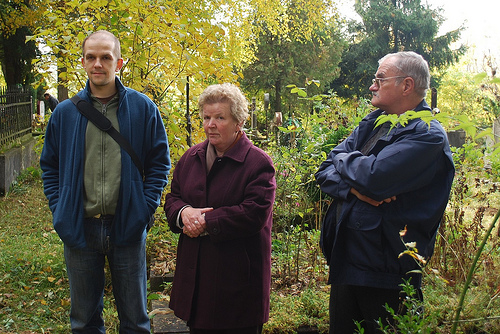 PS. This is by far my most personal entry.