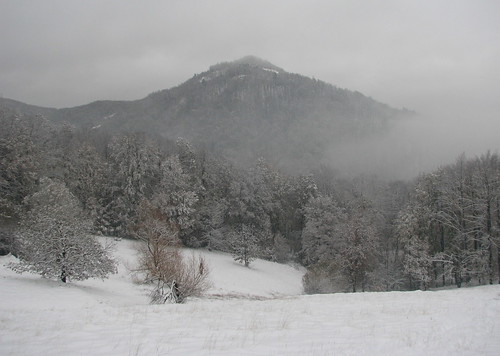 Yesterday night while we were drinking a cool beer or two in the recently reconditioned Scottish Pub it started snowing outside. And when I say it started snowing, I mean heavily. When we got out of the pub we couldn’t really believe our eyes as everything was white and there were already a few centimeters of snow on the ground. So we instantly planned a nice trip for today.

This morning I woke up hearing Ioana say “wow”. Opening my eyes I saw her standing at the window and I knew why she said what she said. It looked like it snowed all night and there was a healthy snow blanket covering the ground. A few phone calls and some preparation later we were standing outside waiting for the bus to come still amazed by the amount of snow we were seeing on the 5th of November.

About an hour or so later we (as in Ioana, a friend and myself) were at our usual boarding place a bit disappointed by the grass that was still poking out from the snow. But we tried our luck anyway and while I can’t say it was the best snowboarding trip ever for an early season opener it was more than OK. We made a kicker and tried some jumps with moderate success. Oh, and please see what happens when you ride down a hill concentrating to avoid a tree stump you saw and considered really dangerous while completely forgetting about the kicker you’ve just built in the middle. And the damn thing just POPS UP in front of you leaving you no choice but to jump it… It’s worth watching for Ioana’s comments alone. :-)

OK, that’s it for today. Now for some sleep.

PS. Strategic Flickr and Vimeo links were placed in this post. Find them all and get a virtual pat on the back…