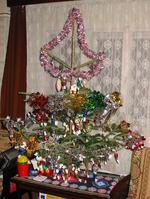 Here it is! You can see about an afternoon’s work on the left side. Taking photos of a Christmas tree is kind of problematic because all those shiny things reflect the camera’s flash and you end up with an ugly pic. So I assure you that the actual tree is a lot more beautiful than what you can see here.

Today didn’t went too well. I woke up again as a result of a phone call. Somebody looking for Mum. Well she wasn’t around. So I went back to sleep. Not long after I woke up I installed Dungeon Siege, hoping that this time my hard drive will not stall as it did the last time when I tried. (I have some serious problems with my HD but I’m too lazy to burn all my MP3s and all the other stuff I have to return it…) It didn’t stall. It installed. I began playing. What a wonderful game! I favour this if it comes down to compare it with Neverwinter Nights. The graphics are beautiful and it has a nicer story and you don’t get lost between 1 million numbers which represent your character’s abilities in Neverwinter.

I played a little and then Mum came and told me to get started with that tree. I got started. But two friends, who came after some Christmas songs, interrupted me. And I paused a little. And then my father did it! Somehow he managed to brake a window. So I had work for almost all the afternoon. With the help of a neighbour I managed to temporarily fix it but it doesn’t look great. I hope father will fix it for good. When he gets… uhm… sober.

After about an hour of fixing work I came back into my room to find my friends half frozen. I apologized but they left in hurry.

I continued with the tree slowly reaching phase 1 ( = all the candies up) then phase 2 ( = all the globes) and then the final stage.

I was done with it! Ha. Time for some more Dungeon Siege. Which I played for a few more hours. Then I took a nightly bath. And here I am.