Back to the good life

After just a little more than a week of cable Internet access what I can say is: it’s good to be back. It’s good to be able to leave my favorite newsreader open all the time, have an email notification utility autocheck all my 7 active email accounts every 10 minutes, have friends download pictures and other stuff from my personal FTP, leave my webcam open almost all the time, play some games online when I’m bored and I haven’t said anything yet about the continuous download action I’m doing. It’s never been this good since 2001 when I was doing all this on a now defunct company’s money. But wheels turn, and even if it’s my money I’m playing with now it’s still better than great. Au revoir dial-up times… I hope forever.

Studying my referers I noticed quite a few incoming hits from Matt Welch’s weblog and upon checking the site I found his post named ‘What Are Your Favorite Romanian Websites?’ which is a short list of Romanian weblogs. I’m featured alongside sites like Dragos Novac’s @rgumente, Douglas and Claudia Muir’s Halfway Down the Danube and Christian Paul’s Kit Blog just to name the Romanian weblogs I already knew about, read and respect. As usual I also found some new bookmarks which will probably appear shortly in my left sidebar. Perfectly Imperfect for example looks like quite a good read.

Anyway I’m really happy that I got my blog mentioned. 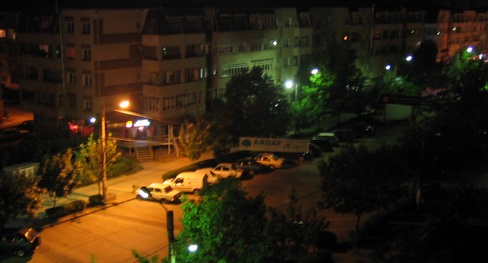 This is it. Staying in alone on Saturday night makes me melancholic. And as I looked out the window on my way to a nightly shower I thought the street underneath looked pretty melancholic too. So I took a shot…

What you can see in the photo is part of Baia Mare’s Traian Boulevard. At the left the big space where no car is parked is the bus station which is very practical for me as it’s very close so basically I step out from the flat and I’m in it. No more loosing the bus that takes me home to Baia Sprie for a hot soup or a real meal for that matter. Then there’s the Herra GSM shop where I got my Orange subscription deal made. Further down the street (at the far right side of the picture) you can see the orange and blue lights of the Ultra PRO Computers shop where I usually get all my hardware.

As you can see Baia Mare can’t really claim that it’s got an active nightlife as there’s nobody on the street in the picture. No people and no moving cars. And it’s Saturday 11:30 PM…

The perspective from my window is a lot bigger and very nice actually and I intend to post more pics. I’m just waiting for the right moment to shoot them.

The headaches are over

Since yesterday morning my cable Internet related headaches ended. Because I went to the cable company to pick up my contract which was there to be rectified because they messed up my name at first try (nothing unusual there) and I also asked for my subscription to be changed to 64 kbps with unlimited included traffic per month. So as of yesterday I’m back in my posture of a hard downloader pimp! Weee! I also played a few stages of Colin McRae Rally as Gabriel suggested in a previous comment, and it’s indeed really fun.

I just posted this quickly in an advertising break of the Romanian Playboy Awards live on Pro TV. On a Saturday night when I’m staying in. Unusual…

So, last Wednesday I moved into my new appartment. And waited for two days for the permanent Internet connection. As it turned out I gave the guys from the cable company a wrong phone number and they tried to call me early on Monday but to no avail. I still don’t know how I was able to do this. Anyway I got cable installed on Friday.

And I immediately realized that I went for the wrong subscription plan. I mean 128 kbps is cool, really cool in fact, but 1.5 gigabytes of traffic per month is nothing! Nothing. Let’s think about it for a moment: if I download 100 megs a day it’s barely enough for 15 days. Half a month! And you can download 100 megs on 128 kpbs in a few minutes… What was I thinking!? So my current ideea is to switch my subscription plan to 64 kbps and unlimited traffic per month for five more bucks. This way I’ll be able to resume my download addiction. Starting with next month.