Apparently in the rush of creating an e-shop packed with everything from perfumes to hammers magazinultau.ro seriously overlooked the data entry part. You can see the results below. 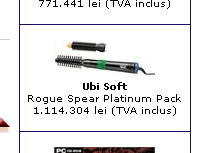 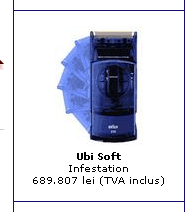 And so on… I found these browsing the PlayStation2 games. After all this is what makes browsing such a funny activity. :)

Not your average Santa. (He’s sober. Not!)

Some crazy-violent-grouse cartoon stories. (Very nice graphics, sounds and general design. But they are still violent as hell! Go check!)

Plus it seems some researchers definetly ran out of research material and are now publishing this article entitled “Ear damage by MP3, DVD and digital television?”. Since I listen almost exclusively MP3s, watch a lot of DivX ;-) movies (in which the DVD’s soundtrack is once more re-compressed) and also have digital television I should be looking forward for a nice deafness. Cool!

And when I say “fuckin’ rockaz” I mean FUCKING ROCKERS.

Suppose you go to your fave dance club. Suppose you find it stuffed with rockers who came home for the Winter Holidays. But assume that you actually want to dance and that they’re filling up half the dancefloor and you’ll be pretty upset. As I am. Even if they cleared up at about 3 o’clock in the morning. When I just caught the vibe…

It was an adventureous night. At about 3 AM (and something) I went to the disco with some friends. And then at about 4 AM back to that club. And then home. And I still have the conscience to write these. Hehehe. It means I haven’t drank THAT much. And this is good news because tomorrow I won’t have THAT BAD hangover. Hehehehe. Or, won’t I?

Yeah. It seems I’ll be responsable of handing out a Christmas present to the trusty gang @ drumandbass.ro. This present will consist of adding an MP3 mix made by Seb to the database. Which I listened almost all the day. And I can say that it’s da bomb! NuSkool Breakz featuring the best names out there (for example now I’m listening to Way Out West’s Intensify), seamless mixing and a general good feeling about it. Very nice.

Also I’m getting ready to spend the night in this really nice club, Cuba.