One more thought about the NYE party and then I’ll burry the thought. I’ll try at least.

The intro. There were these kids with us at the party. 15 - 16 years. Girls mostly. Plus one guy. Being drunk, I spotted one of the girls sitting there very sad. Having nothing else to do I went to cheer her up. It looks like I’ve succeded because yesterday I received an SMS in which she was telling me that I’m such a ‘cool guy’ that I made her happy then.

Well this got me thinking. If it only takes this to be a ‘cool guy’ then I could be a ‘cool guy’ really often. But then I thought about what does actually ‘cool guy’ mean for kids of this age… Answer: nothing really. Just as the word ‘friend’ doesn’t really mean anything to them either.

Maybe I shouldn’t think so much about stupid little things like this. Hehe.

No more partying for a while. Because I’m really afraid that I’m going to drown that neuron of mine. And I don’t feel like it anyway. Partying, that is.

Whoa… And it’s already Saturday. I’ll stay home in the evening and do the usual. Cool / record worthy video trainspotting. Mouse pointer on the record button… It seems I created a cult. My vid captures spread in the whole town. I’m famous! Well actually, no. I’m not.

I’m back. Actually I was back on the 1st but I was (and I still am) such in a bad mood that I really had absolutely no power to write in the blog. Actually I don’t know why I have this bad mood, since the NYE party was quite, uhm, quite nice… I had the general bad mood since Christmas. And generally through the winter holidays because these are the days when you miss a girlfriend the most. And since I don’t have one…

I leeched lots of nu skul / dark breaks lately. They’re sooo cool. Hehe. Building up a nice library. As much as I can from dial-up… Yuk. Still better than nothing… 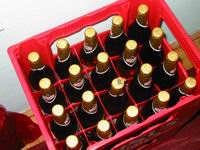 That last party rant begins to lose sense when I take a peek at that 20 pack I have waiting for me on the hallway. It really gives me courage for the two nights ahead. Two and a half hours and I’m gone.

Oh. Forgot to mention that it’s going to be the same old sausage party as usual. Like 10 guys and 4 girls. Great.

Again, looking at that beer pack makes me even a bigger optimist!

What’s next? Daylight by night?

Or am I a brainwashed spy?