Designed by a twelwe year old. 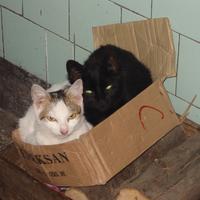 “Many good people fit well in a small space” teaches us a Hungarian saying. I don’t know if it works for cats too but judging from this picture it seems so. However saying this is a little exagerated, because that black cat isn’t exactly the definition of “good”. He’s naughty. Really-really naughty.

And I haven’t said anything about how spoiled he is. I discovered that you can observe how your parents are getting older by looking at their attitude regarding domestic animals. 5 years ago the cats were treated like in the army but nowadays they suddenly discovered that those “cute little beings” only like cat food (and not all kinds, only the expensive kinds!) and they can’t be put out for the night. Especially in the winter. So the “cute little beings” (I won’t argue about the “cute” factor) sleep nicely in our bathroom. I won’t say anything about the smell that persists there but it’s far from what I would call “nice”…

It’s a “cute” pic though. Shot it yesterday morning ignoring the rush of getting ready to go boarding for a moment. Worth it.

Oh, the joys of boarding!

Well yesterday was an interesting day. I woke up full of energy ready to work on those scripts. But the moment I opened my eyes I saw a thick layer of snow on the trees outside my window. I thought I should take a better look. I took a better look. And the moment I saw how things were looking outside, I decided:

Go boarding now or bust! So I ate quickly (checking the thermometer every 5 minutes to see that, yes, it’s -4°C constant) and went up to my Grandpa where I’m keeping my board / boots. Of course he wasn’t home. I found him down in the town in front of the church helping to plow the snow, and he asked me to come back after about an hour. I came home. Plowed the snow myself. And then played some Tony Hawk’s Pro Skater. Just to get myself in the mood. :-) Anyway I haven’t written a byte of code.

After an hour I was back at my Grandpa’s. Got equipped (= I took my boots on) and I was off! Had a lot of fun, even if the track was kind of shit. Not enough snow, plus nobody mowed the place before the snow fell and this means that it didn’t look so good, with all that grass / weed sticking out. Luckily snowboards slip on almost everything.

Conclusion: I had a lot of fun. I took my dose, so to say. But when I came home I fell flat into the bed. And slept since then. Now I’m up. It’s 2 AM and something. My sleeping patterns are waaay beyond messed up.

The nice thing is that now that there’s snow I have to work a lot on that project, plus, as a bonus, I have an exam Saturday. Oh, the joooys of exams. I don’t think I’ll have the chance to learn anything. But I’ll try. Haha.

Tomorrow I have to write roughly a ton of PHP admin scripts.

A dull, boring and repetitive task which I like about as much as seeing my own CENSORED

I’ll write these down 100 times. Until I get them.