And who’s Tyler Durden after all?

Today was just the average school day. In the morning I woke up really late. So I thought I’d miss the first hour of the first class, English. I went online and I got almost all the Happy Tree Friends episodes. I feel safer if I have them on my harddrive. I ended up missing the first three hours of school. So I dropped in at 11:00 instead of 8:00 looking forward to attend six hours of economics… I found out that our English teacher (my neighbour, mother of a good friend of mine) freaked out because there were the usual two students (out of 17) at her class. There would have been three if I weren’t that lazy… So we moved the English class to 11:00 on Mondays.

Coming home I found a new issue of Muzik waiting for me… And a superb chilly CD mixed by Radio One’s Gilles Peterson. Superb, really. I read a bit of Muzik. Watched the second part of ‘What Women Want’, because I saw the first hour or so yesterday night on satellite and I just couldn’t keep my eyes open for it then… So I took out one of my oldest DivX CDs today and flipped it in. Actually I couldn’t really remember how it ends besides that it had a happy ending (what else would you expect from a romantic comedy featuring Mel Gibson?). After seeing it I went to sleep. As usual…

I don’t know but I feel that this a real problem. Lately I’m so lazy and tired almost all the day. I started taking some vitamins but they don’t seem to help too much. Maybe I’ll visit a doctor… Soon.

This page. Messed up. Badly.

Well, this is a pretty popular subject here in my blog. But I think I’ll burry it. :-)

I was looking around on the Net for some good MySQL books and I found two which I mentioned in an earlier post. I wanted to buy this one from Amazon UK or FR. And then my french connection jumped into the picture protesting and telling me that he’ll buy me the book (supporting all charges) because it’s for my work and bla-bla. I said OK. Who would said something else? He was actually going to buy it this week.

But what do I see when I visit a local bookstore? Just the afore mentioned book translated into comfortable Romanian for half of the price of the original English edition. I haven’t thought too much about it. I saw it Friday, bought it yesterday. The thought of having a paper reference for MySQL keeps me so warm and fuzzy. I peeked into it yesterday afternoon and it seems really comprehensive!

So, it’s time to plug some MySQL knowledge holes!

Maybe in the future (after getting myself through this book) I’ll consider getting the cookbook too.

Ready to shop 'til I drop 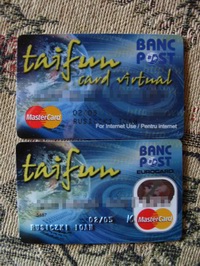 Well, yes, I received my Internet enabled credit card. Actually I got it Friday, and I could’ve got it Tuesday because it was ready, and already waiting for me at the bank. But the important thing is I got it.

Although there are two cards in the picture I’m talking using singular here because one of the cards is the “real” card and the another one is a “virtual” card. The real card can be used in shops and at ATMs while the virtual card can only be used for Internet purchases. Before going shopping online one should transfer a certain amount of money to his virtual card account from the real card’s account. It is done like this to protect the customers from credit card fraud for which my dear country is very well know. If one transfers a limited amount of money (about as much as he’ll use to buy what he wants online) into his virtual card account and some bad cracker boy finds out the details of his card he can’t do much harm if the customer has already made his purchases since there’s no money left on the card. Pretty smart. But also a bit inconvenient as one has to use the ATM to transfer the money from one account into the other. Still, it’s a lot better than being fucked. Enough explanations!

The funny thing is that after I got it I began to wonder what will I buy with it? Friday night I took it out with me, and I tried to transfer a certain amount of money. I haven’t succeeded because I didn’t really know what I’m doing. I was drunk. Saturday I jumped out of bed and checked if I still have the card. Thought I forgot it in the ATM. But it was there. Pheeew! ;-) Note to self: leave your credit cards at home if you plan to drink.

Saturday I successfully transferred some money into the virtual card’s account and I succeeded creating myself a trial account at Easy News. I was very happy seeing that, yes, my card does work!

But my dilemma continues. What will I buy? I think the first major purchase will be a domain name… But all this later…