Yes! I finally found a way to disable those “damn-this-drives-me-crazy” low on diskspace popups… They were getting on my nerves badly!

Sorry but I somehow promised to blog this. To meself. So. Colon = :

At 4:00 AM there came Ova (Ovidiu) with “Palinca de Maramures”. Translate this if you can. :-P

It’s snowing outside. How annoying!

This winter was too much. I wanted snow so much. But after 4 months I can say I had enough. More than enough.

After so much frustration let’s talk about the music!

But I don’t know what to say about this album. Because so much has been said… Countless sites published reviews. There are lots of them in magazines, forums, shopping sites… I’m not adding one to the long list.

All I can say is that I’m on the side of those who enjoy the album. A lot. It’s fantastic. Of course that after you release something so big as Mezzanine it’s hard to top it. And I can’t say that 100th Window is better than Mezzanine. But it’s not worse either. I love the album and that’s that! :-) 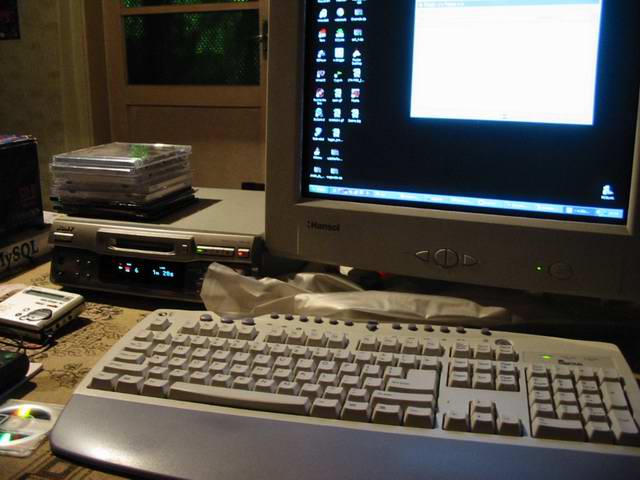 And I sucked R.I.A.A.’s dick so to say. Because the CD is copy protected. I haven’t noticed much from the start. I saw the sticker on the CD but when I put it into the CD-ROM of my ‘puter a player popped up and started playing… So I enjoyed. The fishy thing were the high hats. Which sounded a bit weird. But I listened to the album anyway.

The problem came at night. Because at night I usually listen to the music using my headphones, which aren’t Sennheiser but are some fairly good quality Kenwoods. So I started listening to the album. And it sounded bad. Really - really bad. I asked myself: what the Hell? What do they use that million dollar studio equipment for if the result is so lo-fi? I was thinking that I had better quality recordings on tape!

I checked Massive Attack’s forums. And while checking and reading about 100 threads about people having problems with copy protection I suddenly realised that I’m not listening to CD audio tracks chained through that awful looking player but some shitty WMA or what… At 47kbps. Oh GREAT! Just great!!! So I pay for my first CD and I’m stuck listening to shitty WMAs because I only own a computer CD-ROM and not a stand-alone CD player. Grrr! Maximum annoyance! Frustration. Questions like: “Why haven’t I downloaded this from the Internet?” Etc.

Next stop: Exact Audio Copy. Since I was looking rather confused at some fake shit I checked EAC’s forum. And there came the answers! It seems that my CD is protected with Cactus Data Shield. This involves two methods of protection (at least as much as I figured):

OK. Further actions I took today: Went to a friend. Borrowed his Sony MiniDisc Deck. Fired up EAC. Read the TOC “manually”. Pushed record on the MD deck. Play in Exact Audio Copy. I’m recording it to MD now. Where I’ll listen to it mostly anyway…

If I’ll get really angry I’ll record it in analog mode to the computer too. And then MP3 it. I do have SPDIF connection between my soundcard and CD-ROM so the quality will be almost the same as of a direct rip. I think… And I hope. :-)